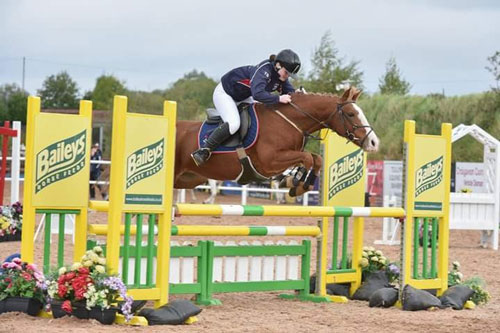 Ballymena Academy’s Novice Navy Team, consisting of Alex Byrne, Zoe Dickey, Myah McClean and Alex Henry McCool had an exceptional end to last season, travelling down to Mullingar Equestrian Centre for the All-Ireland Inter-Schools’ Final. All team members jumped double clears in the first round to get through to the speed round where they were the fastest team to finish off a great weekend placing them 1st and being crowned the TRI All-Ireland School Show Jumping Champions.

Throughout this year one Novice Team and two Open Teams have been attending the Ulster Schools’ Show Jumping League at the Meadows Equestrian Centre in Lurgan. The Navy Open Team, consisting of Alex Byrne, William Hamilton and Tori Surgeoner, had an exceptional season winning four out of five Saturdays which secured their place as Ulster Schools’ Show Jumping Champions 2017/18. This qualified them to compete in the All- Ireland Competition.